On September 15th 2008, Lehman Brothers filed for bankruptcy. The $639 billion in assets investment banking behemoth was the largest victim of the Global Financial Crisis (GFC) that shook global financial markets between 2007 and 2008. The culprit? – A miscalculated exposure to mortgage-backed securities (MBS) and other collateral debt obligations (CDOs), an error which proved fatal after the collapse of the US housing market.

At the time Lehman filed for bankruptcy, it was a major player in the global derivatives market. Its portfolio included 906,000 derivative transactions with an estimated notional value of $35 trillion, accounting to roughly 5% of the global market value. The majority of Lehman’s derivatives were bilateral agreements traded in the over-the-counter (OTC) market, representing 96% of the net-worth of its derivatives-related entities[1]. 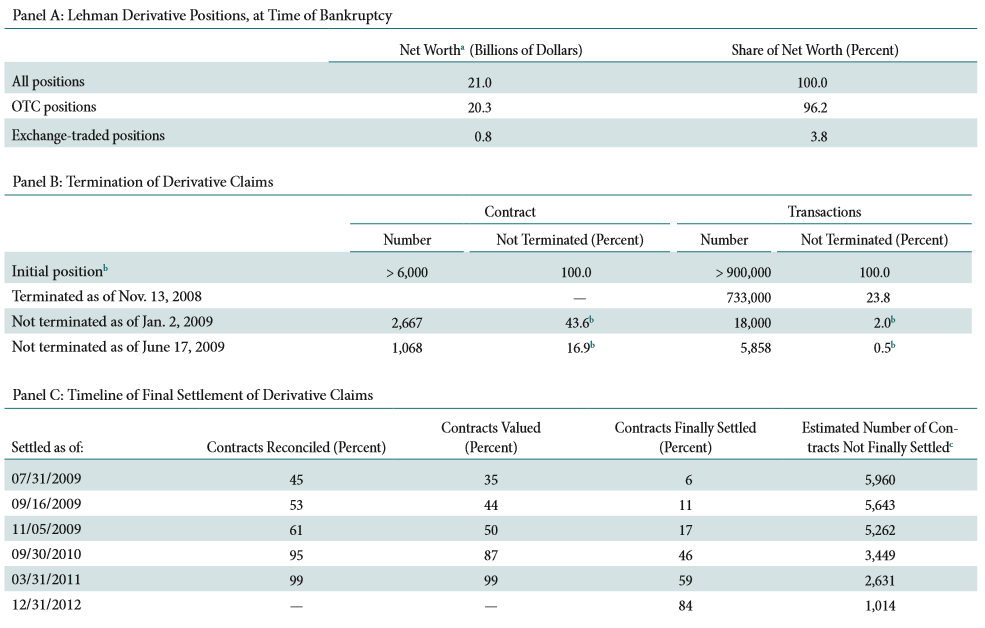 Lehman had more thanTHE LEHMAN CASE 200 registered subsidiaries in 21 countries, and the insolvency laws of more than 80 jurisdictions were implicated during the settlement of contracts. To fully settle its OTC derivative obligations, the authorities needed to reconcile the universe of transactions, value each underlying transaction and agree on a net settlement amount. Overall, it was a long and complex process lasting several years that included lawsuits concerning “egregious and commercially unreasonable” calculation statements by some counterparties.

Although the Lehman close-out involved legal and operational challenges, the resolution of its centrally cleared positions proceeded relatively smoothly, with CCPs responding swiftly to prevent any increase in the company’s exposure. After knowing that there would be no payments of margin from Lehman, CCPs proceeded to Lehman the company in default and initiated a process to wind down its proprietary trading positions while transferring the client accounts to other clearing members.

The most commonly cited example on how CCPs can successfully manage defaults in the derivatives markets is LCH’s SwapClear service, which represented half of the global interest-rate swap market globally. At the moment of the default, Lehman had a $9 trillion OTC portfolio comprising over 66,000 trades, while the initial margin posted by the company to cover for potential losses was of $2 billion.[2] Following standardised default procedures, SwapClear proceeded to:

By September 23rd, 90% of the risk exposure had been dealt with, with the remaining covered by collateral. By week 3 after filing Chapter 11, the totality of the OTC SwapClear positions had been managed, using 100% of the variation margin posted by the defaulting clearing member and only 35% of its initial margin. Similar timelines were followed by other major CCPs globally, including Eurex Clearing − two weeks to wind down proprietary positions and transfer clients’ portfolios, and DTCC − five weeks to close out over $500 billion in market participants’ exposure.

The GFC events spurred calls for central clearing from regulators globally. CCPs were now seen as counterparty risk mitigators able to reduce systemic risk in the OTC derivatives markets via their margining practices. In 2009, the G20 leaders agreed in Pittsburgh on an agenda to bring further improvements in the OTC derivatives market infrastructure. In the US, the regulatory exemption for OTC derivatives under the United States Bankruptcy Code was eliminated, and the derivative markets reform was implemented via the Dodd-Frank Wall Street Reform and Consumer Protection Act of 2010 (Dodd-Frank).

For further information on the Lehman case, please see: CCP Default Management and the Collapse of Lehman Brothers